Cortana is getting one feature which I always had expected to have, find out my pending tasks which I commit in the emails. Even with huge collaboration tools available around the globe, email remains the major form of communication, and if my digital assistant can read, and remind me about it, nothing like that. 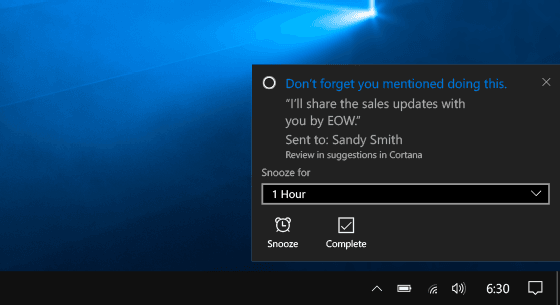 This feature is called as Suggested Reminders which Cortana finds in your emails. This is automated and makes sure you don’t forget. So if you have replied to the email that you would be back with all details tomorrow, Cortana understands it, and pop-up a reminder. It asks you if you if this is a valid task, and if you would like to set up a reminder for this.Suggested Reminders uses  Microsoft Research’s machine learning technology.

Cortana does all the work in the background making this helpful feature incredibly easy to use. To get started, simply send emails as you would normally and when you’ll do something, Cortana will recognize that and save the details in a suggested reminder for you. If you’ve specified a deadline in the email, Cortana will ping you before it’s due and save it in the action center. Other suggested reminders will be in the Cortana home. No need to copy her on the email or change how you do things today, she will adapt to you.

As shared on the Official Blog post, Suggested Reminders feature is rolling out to Windows 10 users in the United States and available for other devices including Android and iOS. The rest of the world will get to see it soon. Yup, we eventually tend to!

Check out the small video below to get an idea of how this feature works at its best: