Are you into a panic zone? Is your computer affected by WannaCry? Well, WannaCry is a ransom malware that is spreading across at a very fast pace. It is based out on a concept that until you pay a ransom, your PC won’t be used. It usually charges a ransom in the form of bitcoin. It usually targets remotely those computers that have unsupported versions of Windows built in them. Once your computer is affected, it spreads across other computers that are connected through same network or perhaps the random hosts that are connected with them. As per the latest survey, it has been seen that this virus has indeed attacked 2,000,00 systems across 150 countries.

What Exactly is WannaCry?

This is intended a common attack that is done on the PC of the victim. It is known by various names such as WannaCry, WCry and WanaCrypt. It has various ways to infect your PC and a particular illustration to explain this is spreading this virus via Email. When a victim opens the attachment in the Email, the PC of the victim gets affected. 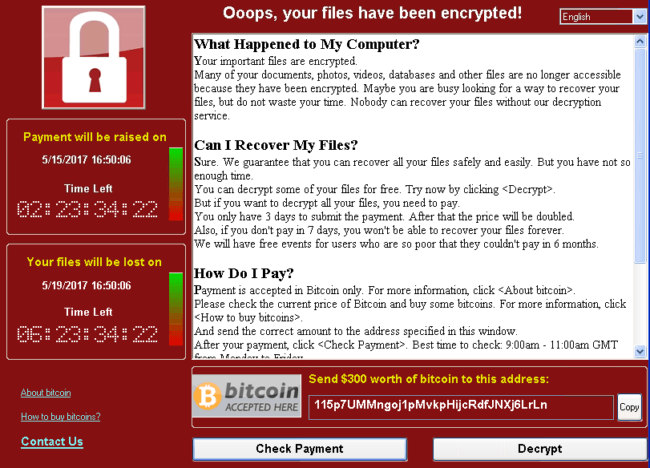 What Trouble can it Produce?

As said earlier, it targets a particular computer, perhaps seizes the files that are available and then encrypts in a way that will make our PC unusable. In addition, you will come across a pop up that would demand a ransom up to $300.

What are OS Hit by WannaCry?

How to Get Back to the Usual Mode if Infected?

Well, there is nothing much that you can do in the following case. Even if you have paid the ransom amount there is no such probability that you can recover the data back. You can just pray and try your luck. The users that are using Mac version need not worry at all as this virus doesn’t get affected by them.

Is There Any Possibility of Removal?

There is a very slim chance of removing it. You can perhaps use an advanced antivirus program that will decode the virus or try to enter into a safe mode and remove those harmful files pretty much manually.

If you are still safe from WannaCry attack, we recommend you to take precautions even if you are on an unsupported version of Windows. This the first time in the history, Microsoft released security patches for unsupported versions like Windows XP, Windows Server 20003, Windows Server 2008 and Windows 8. The will hopefully fix the SMB flaw which is exploited by WannaCry attackers.

Other than this you should disable SMBv1 from this article shared by Microsoft Support.

According to Dona Sarkar tweet, if you are running Windows 10 you are safe. So you should update to Windows 10 and download the latest security patch.

If you are on older Windows version such as Windows XP or Windows 8, check the process mentioned on MSLeaks.com.

1. Search for Windows Features in your system.

2. Find SMB in the dialog box and uncheck the box.

3. Click OK and restart your laptop when asked for.

Who are Responsible for the Attack?

It is believed from various sources that “The Shadow Brokers”, perhaps a group of Ethical hackers are responsible for this attack. They have in turn stolen a cyber-weapon from NSA based in the United States of America.

The tool which they have stolen is known as Ethereal Blue which gives the permission to access all the Windows system and thus they get access to various computers across the globe.

What are the Precautions that you Need to Take Care?

The very first thing that you should do if not done is update the system as early as possible. In addition, be careful while opening unwanted Emails and open only those who you feel are from a trusted source.

Can We Ethical hackers be Caught?

Since the transaction is made in Bitcoin, it is fairly difficult to recognize the address of the hackers. Although, few cyber security professionals have claimed that you can indeed catch them via the ransomware’s code as they can grab information from the transaction detail of the bitcoin.

Matthieu Suiche reported yesterday on Twitter that there is WannaCry variant with No Kill Switch is there.

However, it is believed that the new version of WannaCry is created by some other hackers and not the one who actually created the first one. Below image will help you find the difference between WannaCry versions. 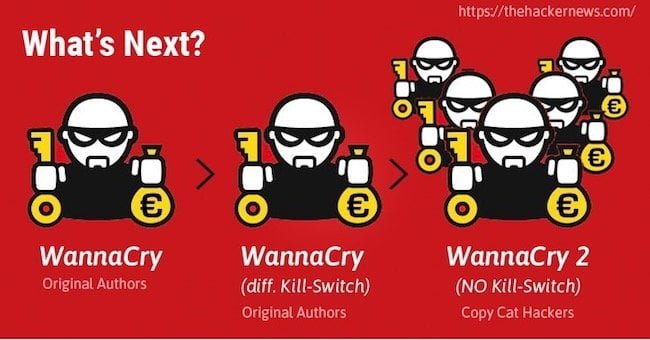 It means that now there are new and old attackers who are hitting vulnerable PCs all around the world that too fast. We request everyone to have a look into this matter and update your system with security patches as soon as you can that were released by Microsoft recently.

Try avoiding internet based suspects that would lead to an attack on your computer. Avoid opening any emails that don’t have a trusted certificate, vulnerable links that would perhaps infect your computer. Stay safe and spread the news.

Features of Cortana in Windows 10