If you started noticing that Windows 10 webcam not working correctly or the webcam freezes after a few minutes of launching or during a video call, then this post will help you resolve Webcam Freezing issue on  Windows 10. It can happen all of a sudden or after a Windows 10 feature update.

How to Fix the Webcam Freezing issue on the Windows 10

The webcam breaks most of the time because of the incompatibility between the driver and the Windows update. It can also be because of the software. Here are the steps you can take to fix webcam not working issue in Windows 10

1] Give permission to webcam for video and pictures

If the problem is related to apps like Skype, it will help you resolve it.

If the problem started occurring after Windows 10 feature update, driver compatibility could be an issue. The best way to figure that out is to visit the OEM website and check for a new software update. If yes, then download the software, and it will also update the drivers 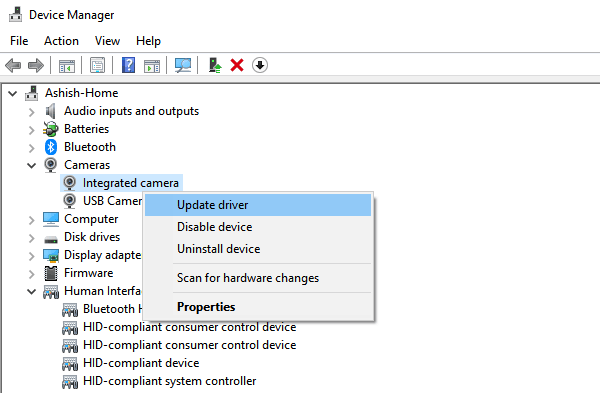 You can also use the device manager to force an update check.

Windows 10 Anniversary Update brought some cool new features and performance improvements to Windows 10. Alongside this, it also has some things broken. One of the latest issues that popped up recently is the Webcam freezing issue. This bug won’t let you make Skype calls if you’re on the Anniversary Update. 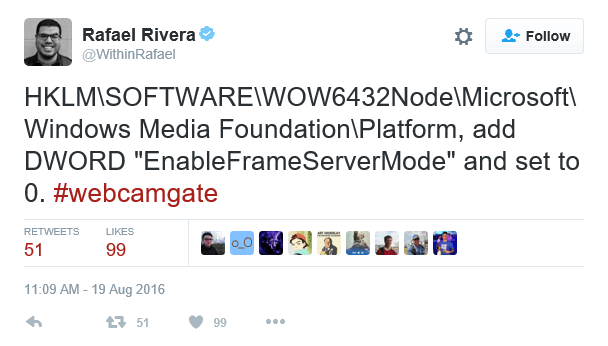 However, the good thing is that Microsoft is aware of the issue and had said that they wouldn’t be releasing a permanent fix until sometime in September. It is also impacting many enterprise customers, and that’s a severe issue. Enterprises need Skype video calls, and for that, they need a webcam. We hope the company releases the fix soon, but till then, we have got you a temporary fix using registry editor by Rafael Rivera. 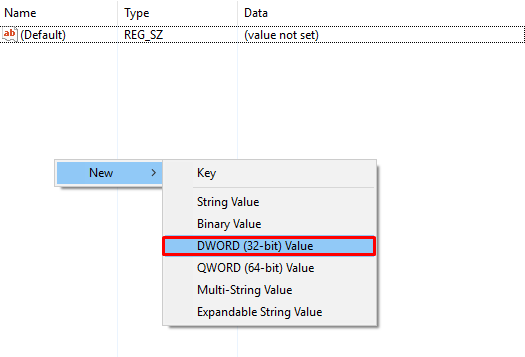 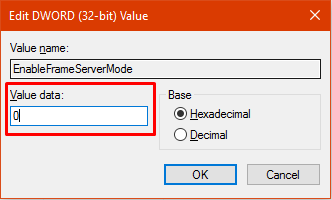 Once your computer restarts, start your Webcam and make a Skype call. It is the only temporary fix available for now, and it works. However, let’s hope Microsoft releases the fix soon, till then try this workaround and let us know in the comments if it works.

According to one member of the Microsoft’s Windows Camera team, the problem is caused by the Anniversary Update removing support for two video compression formats, including MJPEG and H.264 codecs on Windows 10, and opting to support YUY2 encoding instead. The company claims that the decision was made to prevent performance issues due to the change in how Windows Store apps can now access the camera features with the Anniversary Update.

I hope one of these methods was able to Fix the Webcam Freezing issue on the Windows 10.