In this case study, I investigated how backup and restore works when a Windows Phone user migrates from one Windows Phone to another.  I wanted to know if the Backup of Windows Phone, which is stored on the cloud, is only a single instance, or it is based on individual device.

I own a Lumia 920 and HTC 8X and was eager what will happen if I use the same account on both phone and how the backups will work.

This resulted in two kinds of situation.

I skipped signing to Microsoft Account when setting up the HTC 8X Windows Phone for the first time. However later I signed in using the same Microsoft account and created another backup.

In case I would have skipped Situation 1 and signed into same Microsoft Account which was already being used in Lumia 920, what kind  of backup options I will get? Will I be able to restore from the Lumia 920 Backup ? Will the Nokia Lumia Apps also start downloading ? 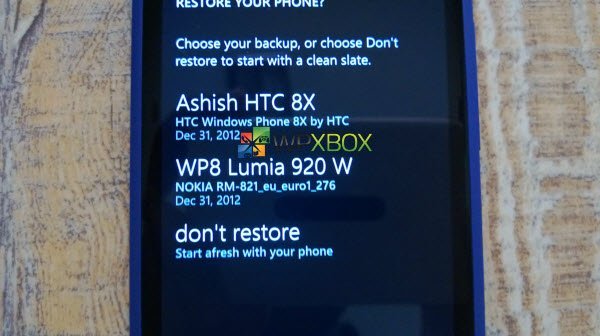 The video makes it clear that every backup is tied up with the type of Phone. So you can have multiple backup instances. It is also possible to use backup of one windows phone with another i.e. I was able to use Lumia 920 Backup and restore it over HTC 8X.

Now answer to the situations we mentioned above :

When you choose not to sign in with a Microsoft account when setting up the Windows Phone for the first time but do it later, all your SMS are synced back. As a matter of fact, it keeps syncing in between all Windows Phone which uses the same Microsoft Account even if you switch temporarily.

However, Call History, Phone Settings & App List were not restored. Even Camera Roll Images and any SMS received priors of signing to a Microsoft Account are not synced.

In fact, when enabling the backup for the first time, you don’t get an option to restore from any previous backup but can only create new backup instance.

This works like regular backup and restore. However, It seems that the restore process tries to download apps, which were specific, to the phone manufacturer. In my case, I had a lot of download errors which were for Nokia Lumia Apps.

Windows 10 is the Last Version of Windows; Update & Service Model to Lead the Way