When it comes to restoring Apps, SMS, and settings of your phone, Microsoft took a middle path. Instead of rolling out complete device restore, they introduced an inbuilt feature which takes care of most important stuff that needs to be backed up. It includes SMS, Pictures (Auto Upload), App installation and so on. This process can be used for both switchings from Windows Phone 8.1 Backup to Windows 10 Mobile or Windows 10 Mobile to another Windows 10 Mobile device or even the same device. Let’s figure out how to Backup and Restore Windows 10 Mobile.

How to Backup and Restore Windows 10 Mobile

1] Name your Phone:  The name of the backup is the name of your phone. It helps you to recognize. This name by default is “windows phone” but you can, and should edit this as the first step. Go to Settings > System > About > Edit Name and give the name of your choice.

2] Online Process: The second thing you should know is the backup, and restore process is online only, and you will need internet to both backup and restore.

3] Microsoft Account: Your Backups are available under OneDrive of your Microsoft Account. When you restore, you will need to sign with the same account you made a backup. Make sure you either have a number or an email id configured with your action. You will also need to verify your identity through one of those options, without which the backup will fail.

Starting with Windows 10 Mobile, the backup process has improved, there is more clarity on how it works and end users have more options and control over it. Before we deep dive into its internals, let’s take a look at how it works, and how you can manually update.

Windows 10 Mobile, like its earlier version, Keeps a  list of installed apps connected to your phone allows participating apps to back up data to the cloud. What is new here is the consumers who have the option to either turn it off for all or only for apps which they choose.

It uses the same data to restore to get you back to the same state. So which part of the app data is part of the backup? It is entirely up to the developers. It could be just settings, game states and so on. 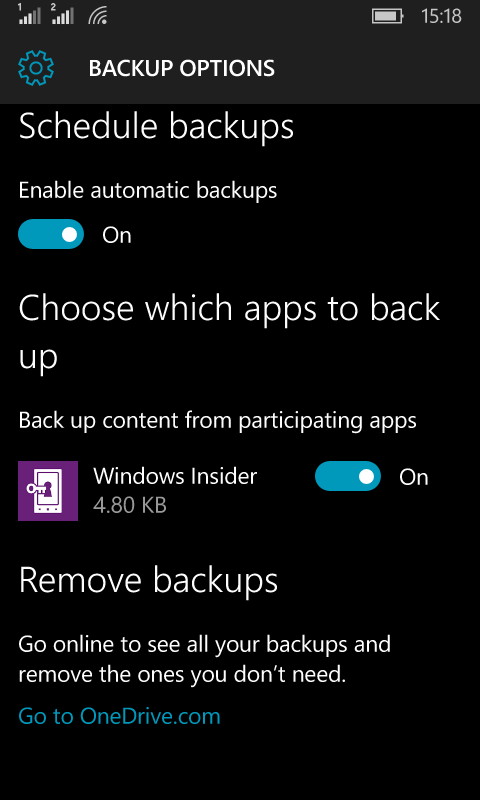 Unlike Windows Phone 8.1, this option is now clubbed with OneDrive and soon will works with third-party apps as well. Go to Photos App > ta in the menu bar and select Settings. You have two links there. One which says “Manage OneDrive Upload Settings” and second “Change where photos and videos are saved.”

The first link launches the OneDrive App Settings. Here you can enable the Camera Upload option if it’s off. The second link shows you the list of apps from the store which supports Auto Upload feature. As of now, it isn’t working.

One thing you should know about Photo Backup is that its an independent process, and is built to upload your photos to OneDrive as a backup continuously. Just imitating manual backup won’t upload your pictures to OneDrive. 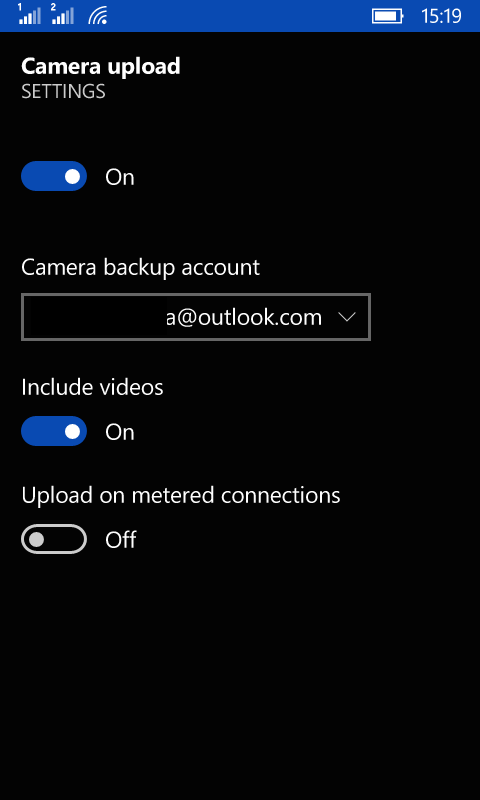 Start Screen Layout, Accounts and Passwords are also part of the backup.  This option is enabled by default and is under Backup.  If you ever switch phones or had to reset your phone, this will help you get the start screen layout with all the tiles back in place.

Backup of all the text messages or SMS is possible, and as per my experience, I have seen it to backup and restore all the text message till date. One option that has changed in here is instead of toggle option for Text Backup; you now have the Option to disable/enable sync messages between devices.

It means while the text backup is certainly on by default, the option to sync message between devices is up to you. Windows 10 Desktop using Cortana can send messages, and soon the Messaging App will be able to read all your SMS from Phone. This option is to give you more control over this. 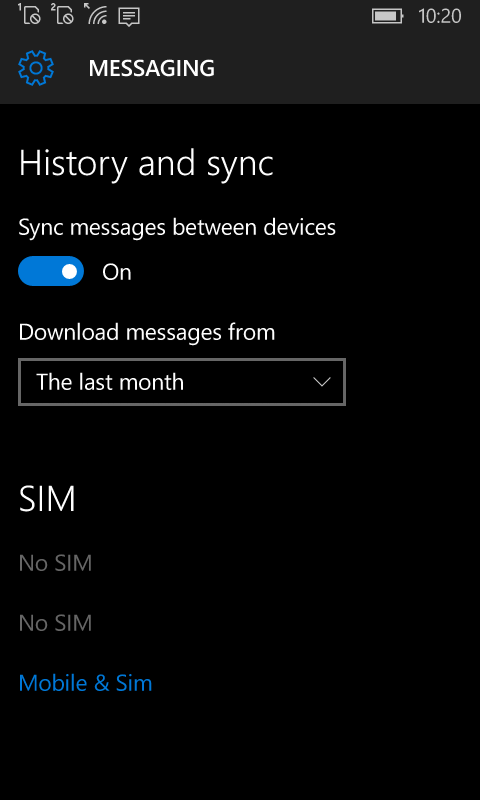 Old Version: If you wish to disable it for some reason, go to Messaging > History & backup > Text Backup Off. 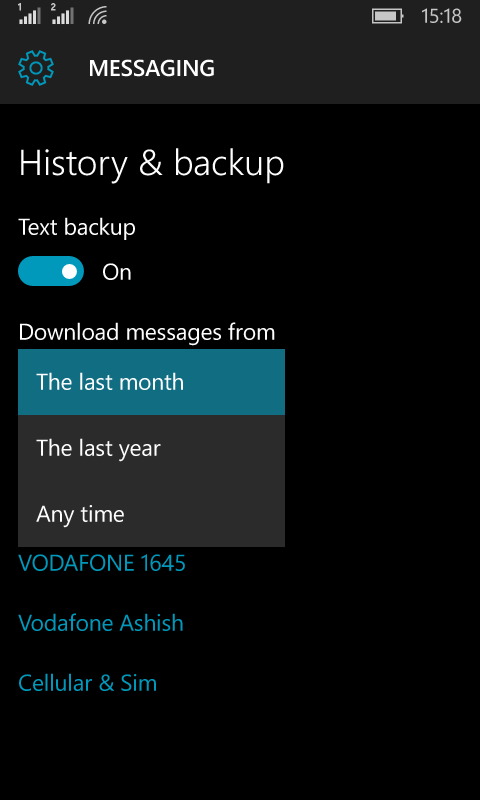 Restore process in Windows 10 Mobile is almost the same. When you switch to phone or after a reset,  to restore settings, apps, app data from the cloud, you will have to use the same Microsoft account with which you had used on the phone before and made a backup. Also, suggest you connect to a WiFi network. It will make sure your restore completes much faster. 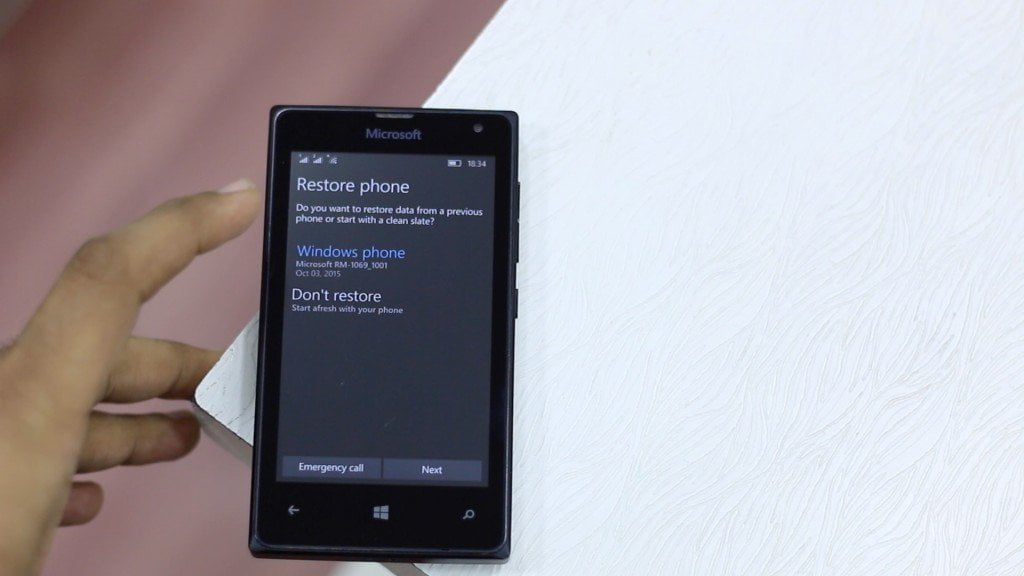 When the restore process hits precisely 20%, the phone asks you to verify your identity. It is possible in three ways.

The SMS part is a little tricky because all you would get is notification, but no access to Message App. However,  the CALL option works flawlessly even though the phone is not ready. The Email id is best if you have access to it through a pc or any other phone. Below is the screenshot where you can see how you can switch between these options. 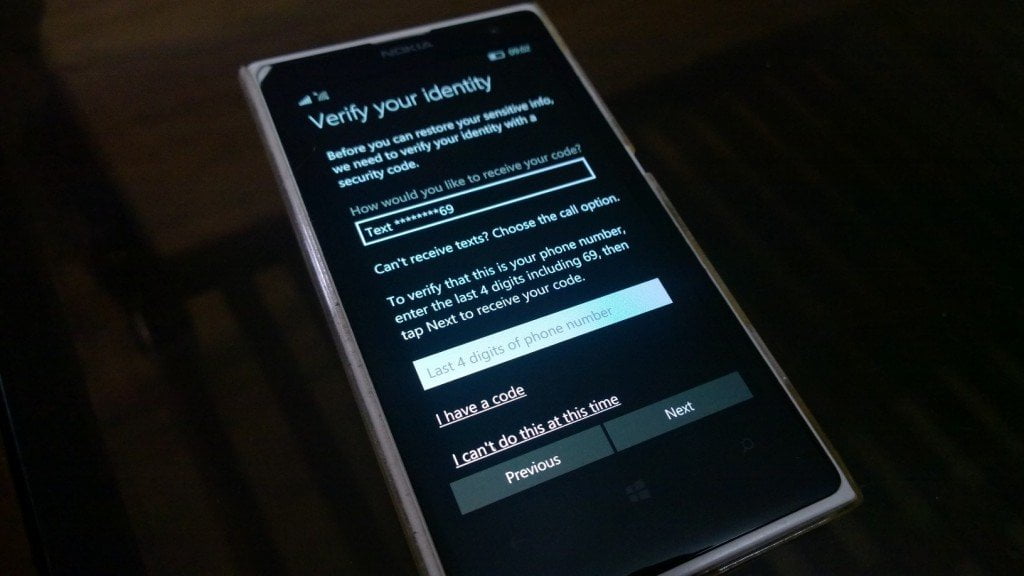 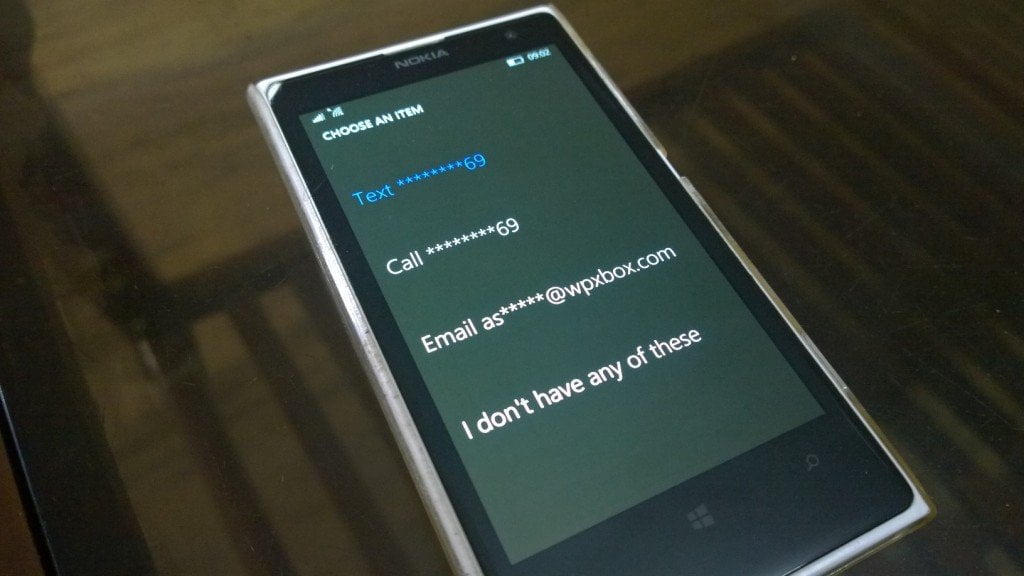 You now have the option to remove the old backups as well. It is essential backups are taking a lot of space on your OneDrive. You may have a phone which is not with you anymore. Right under Settings > Backup > More Options > Remove backups there is a link which says “Go to OneDrive.”

Follow that link, sign-in to your account. It will show you a list of devices in which backup is available in your OneDrive. You can remove devices if any. Interesting to note that this is a central place for all Windows device backup. The same site will also list your Windows PC devices as well.

Let us know if these steps to Backup and Restore Windows 10 Mobile worked for you!