If you are using a Windows Phone 8 device, you might have probably seen the “Other” category in phone storage. This option was available in Windows Phone 7.5 as well and could be managed from Zune. But with WP8, this is causing a major issue on the phone and this has been reported in many forums and websites.

The issue is that the size of “Other” folder is increasing considerably on the phone over a period of use and there is no option to manage it or control it. It is automatically done by the system and the user can no way control it whatsoever. To check the amount of other folder, go to Settings > Phone Storage > then tap  on the usage bar.

Update : Check out the Storage Shrinker App for Windows Phone. It helped us getting 5Gb free of the other storage.

Update: Here is link to a partial solution which may help you increase some space on your Windows Phone. No Guarantees though!!

On my Lumia 920, which is almost 2 months old, this “Other” folder occupies a massive 9.51GB!  Yes, you read it right, almost 1/3rd of the usage storage space on my phone is used by a folder which user does not have control. To investigate what is using up this space, I asked the Windows Phone Support in Twitter and the reply was as below. 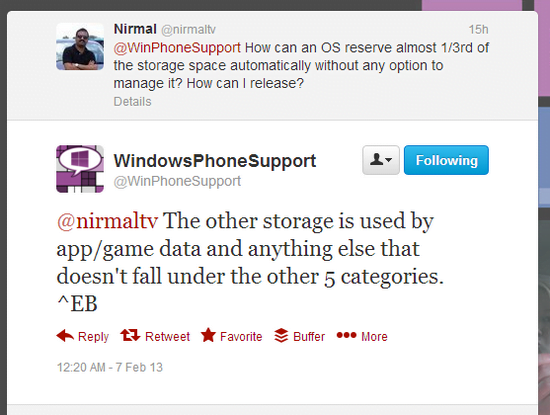 This is understandable, installed apps and games will obviously take space in the form of local cache. I have around 40-50 apps installed on my phone along with couple of games like Angry Birds. With these apps and games installed, I don’t think it would take a massive 9.5GB and if it really takes 9.5GB, then Microsoft seriously needs to think over the cache management in WP8.

But the real issue is not just usage by apps and games. So what exactly contributes to “Other” folder according to Microsoft. I check Zune software (used by WP7.8) to find it and here is what Zune tells me (screenshot below).

The last two items, pictures and videos taken since you last synced with your phone’s primary computer and also content from computers other than your phone’s primary computer. There is no clear explanation from Microsoft on how this is managed. Apart from this SkyDrive auto upload from Pictures hub is also stored in this other folder. Below are two screenshots of phone storage.

First screenshot indicates that other occupies 9.51GB. Now there were some 20-25 images waiting to upload in the pictures hub. I connected to Wi-Fi and uploaded them. As soon as I finished uploading, I took another screenshot of the storage. The second screenshot shows the other folder occupies 9.6GB, an increase of 0.09GB just because I uploaded photos to SkyDrive from my pictures hub. 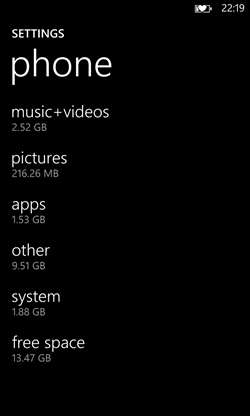 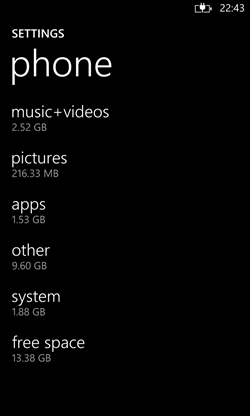 Why would the SkyDrive auto upload photos be stored in Other folder? Seriously I can’t find a connection here. Now 9.6GB makes some sense as I have uploaded more than 3GB of photos to my SkyDrive account and each time I upload, these photos are pushed to other folder as well.

What is the solution?

As of now there is no solution other than doing a reset of your phone to factory settings. Now that Windows Phone has backup option, you can reinstall the apps and restore the other details. Again, this is just a workaround till the time Microsoft brings up cache management in WP8 or newer versions. 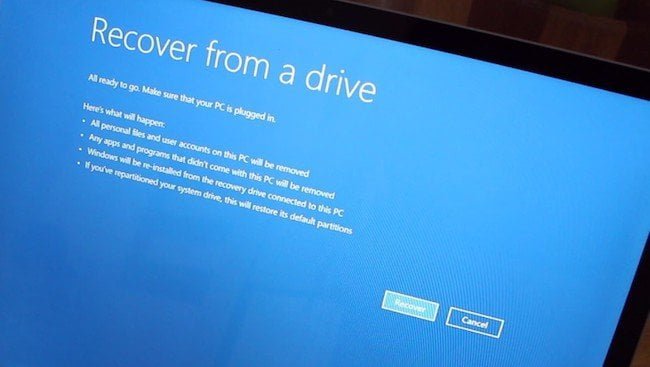 How to Turn Cortana off in the Windows 10 Anniversary Update