At the IFA 2014 in Berlin, Microsoft announced its mid range phone, the Lumia 730 which is also the successor of the popular Lumia 720. We take a detailed look into the device for various aspects and here is the detailed review of Lumia 730. 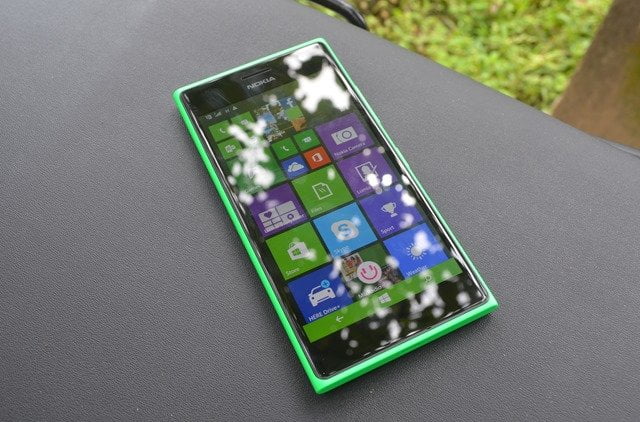 The phone comes with a 4.7 inch, 720 P HD Screen having a PPI of 316, ClearBlack, OLED & Super sensitive touch.  Powered by Snapdragon Quad Core 400, 1 GB RAM and 8 GB of internal storage with option to expand using microSD. It comes loaded with Windows Phone 8.1 with Lumia Denim. Coming to its selling point, the camera, it’s a 6.7 MP FULL HD camera with LED flash and front facing camera of 5 MP Zeiss Optics which turns it into a phone built for selifies. The phone will also be useful for videos calls.

Here is the video review of the Lumia 730.

The Lumia 730 employs  the same design principles of Nokia Lumia 920 which was released in 2012 and was the first Windows Phone 8 device from the company. But what has changed with the design is that Lumia 730 is light weight and also slim. The device has curved edges on the sides and flat finish on the top and bottom. The curved edges gives it a solid feel in the hands. 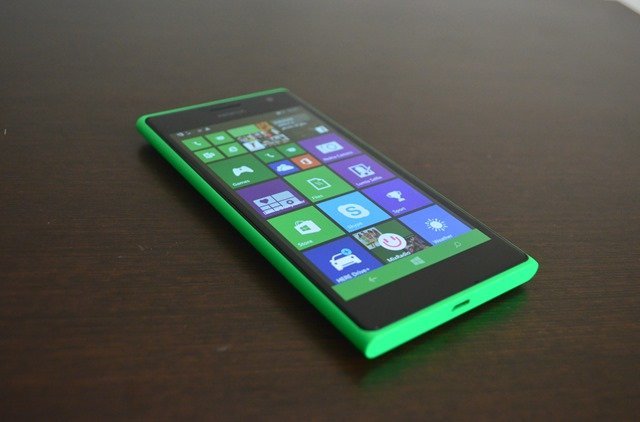 The rear panel has matte finish poly carbonate cover which is removable. The orange variant of the device has glossy finish. The device also ships with removable battery. The phone has the usual set of buttons including power and volume key. There is no dedicated camera button as it is not a PureView device. The 3.5mm audio jack sits on the top while the microUSB slot is at the bottom. Overall the quality of materials used is top notch. 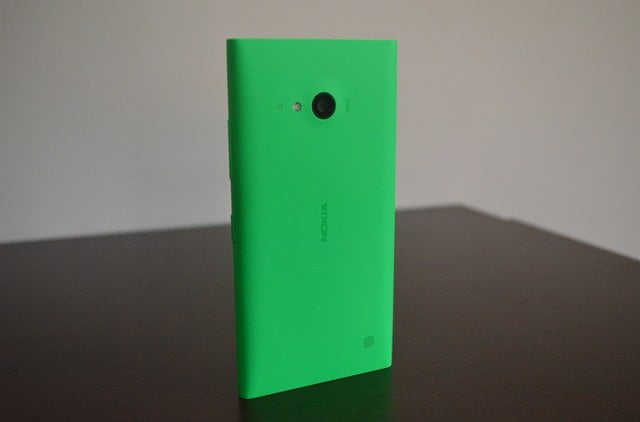 The display on the Lumia 730 is an OLED capacitive touch screen display with 4.7 inches in size giving a pixel density of 316. The display also comes with Nokia’s Clear Black technology which makes it even better. There is also Corning Gorilla Glass 3 for added protection. The HD display on the Lumia 730 is a treat to use with vibrant colors and excellent viewing angles. 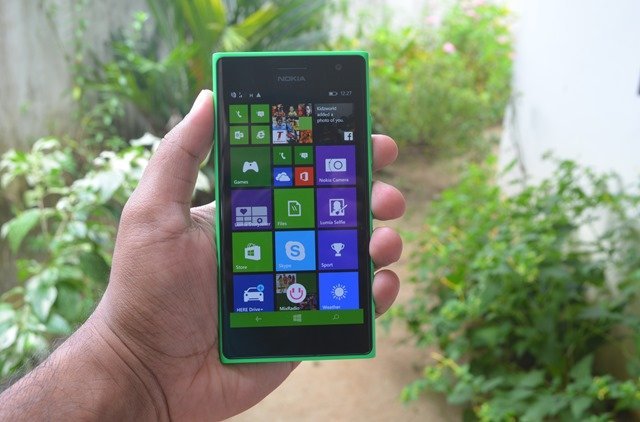 Since it comes with sunlight readability option, you can easily view the phone even in sunlight. Apart from this, it also supports glove mode, so in case you are living in cold conditions you can still use the phone with gloves. The display also has excellent touch response which is smooth and response, you won’t have issues using the display in any condition.

The Lumia 730 comes with a 6.7MP rear camera with flash and a 5MP wide angle front camera for selfies. We have tested the camera at different light conditions and also used both the rear and the front camera for samples. Microsoft has improved the Nokia Camera app and now its much more faster and usable.

From the daylight shots, you can see that the photos have come really well. The saturation levels are good although you might feel the photos are slightly over saturated when viewed the phone’s display. The amount of detailing in the photos is really good for a device in this price point and the macro shots are almost closer to real objects in terms of color reproduction.

The front camera does capture pretty decent shots, but there was a slight problem with focusing closer object. The color and detailing was just fine. Overall, the camera is pretty good for selfies.

The low light photos were a mixed bag as photo taken with extremely low lighting were noisy, but with moderate artificial lights, the photos captured were pretty decent and with flash the photo were pretty good. Since this is not a PureView camera like the Lumia 830 or the Lumia 930, we cannot expect a great low light performance in this mid range category.

The phone can also record videos in 1080p and the quality was pretty decent for a mid range phone.

The Lumia 730 comes with Windows Phone 8.1 which Microsoft had announced back in April 2014 at the BUILD Conference. The software is now a lot matured and comes with almost all features needed on a smartphone including the new notification center. The device runs on Snapdragon Quad Core 400 processor with 1GB of RAM. The performance was smooth without any lag or issues. The best feature of the Windows Phone platform as a whole is great performance even with low RAM. 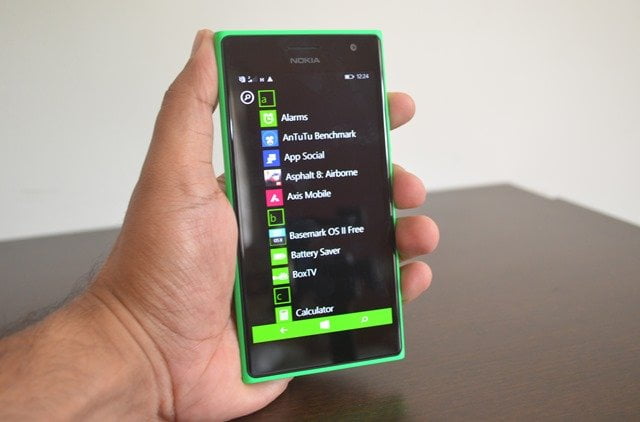 You can move apps to SD Card or install directly on them, share internet, transfer files over Bluetooth, have notification center to manage things. You can run multiple apps i.e. multitasking, and it is easy to switch between them, thanks to fast resume support. Lumia 730 supports SD cards upto 128GB, which is a lot of space for a mid range device.

The 4.7inch HD display is real good for gaming and the Snapdragon Quad core 400 processor with 1GB ensures that there is no lag while playing. The graphic quality is really good and the performance is great. And the best aspect of gaming performance is that it does not heat up considerably while playng games. 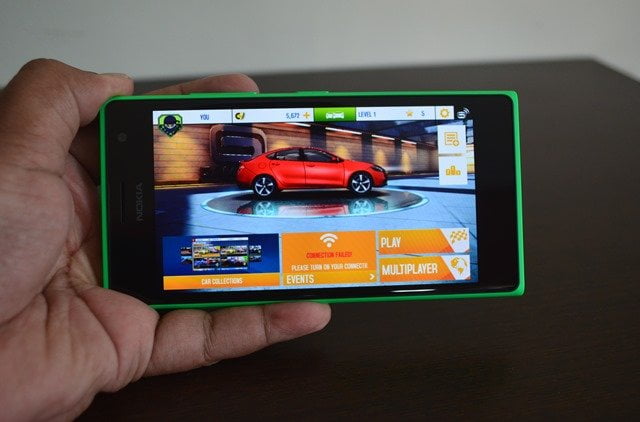 Here is the gaming review of the device.

We performed a battery test of the device by charging it full and using it with the following apps and combinations.

With these criteria, we managed to get around 1 day and 2 hours of battery life which is pretty impressive for a mid range device. 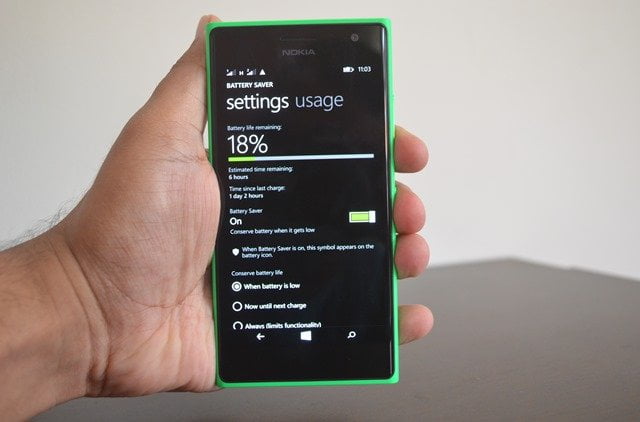 The phone comes with 8GB internal storage and you get around 4.5GB in the first boot. You can always expand the storage via microSD card to 128GB. You can even install or move apps to the SD card. If you feel 8GB is not sufficient for you, you can always expand it and the app performance when playing games installed on SD card is also good. 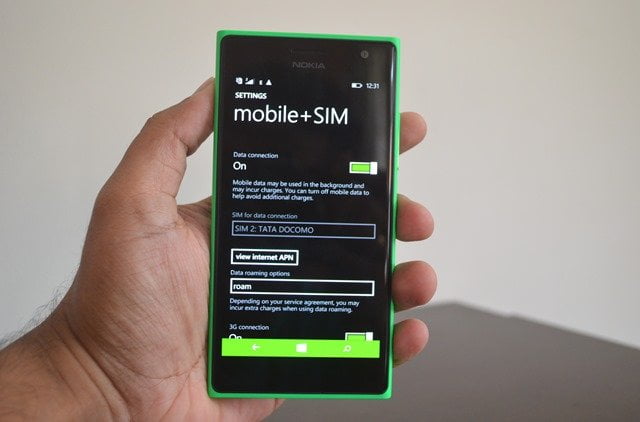 The phone comes with dual SIM card support and WP8.1 has a dedicated section to manage them. The call quality was very good on the device and the signal strength was also great. There was no issues with call drops. Lumia speakers have been always loud, be it any phone. The same goes with Lumia 730 as well, the speaker quality is above average which the default headphones shipped with the device is not that great quality. It is the same earphones included in Lumia 530.

Priced at Rs 14999, the Lumia 730 makes great value for money as it has great build, display, an excellent camera which beats the competition and great battery life. With the latest update, Windows Phone 8.1 has finally caught up with the competition. We recommend this device for anyone looking for a solid all round mid range performer. 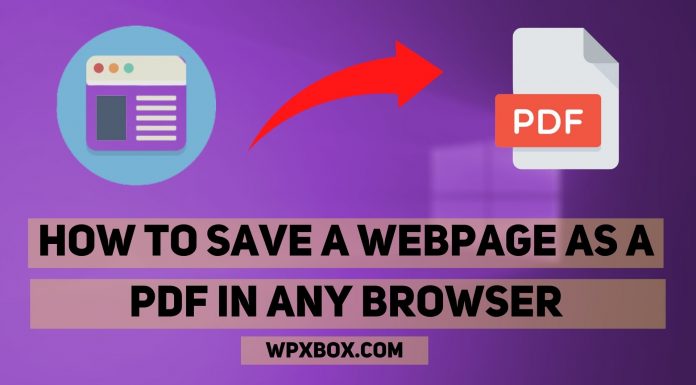 How to Save a Webpage as a PDF in Any Browser

Get notification for Windows 10 Updates Before Downloading or Installing