If you have a Windows OS then it is always necessary to have a powerful security software installed on the system so that you can surf the internet without any fear of virus, worms and other malicious software.

Many people, especially those who have a previous version of Windows OS usually tend to buy a third-party security software to protect the device from any unwanted threat, but if you have new Windows 10 operating system with Anniversary Update, then you have an option to not spend extra amount in purchasing any such thing because this OS comes with an in-built security software named Windows Defender which is FREE, and is capable of detecting and removing any malware and keep your data safe.

In this article, we have tried to let users know that how you can use Windows Defender competes with popular Antivirus based on features. Lets have a look at the top features you find in popular antivirus software these days.

All the current generation antivirus software includes variety of features that are listed below to enhance the functionality and provide top notch performance.

This IMO is one of the most important highlight. Baked into the OS,  Defender is super smooth. It does not take toll on the system for excessive RAM usage or even storage. It works silently most of the time, and doesn’t show up popup-ups or unnecessary notifications unless required.

In previous operating system Windows 7, Microsoft Security Essential was launched but it wasn’t so effective and ultimately third party security software like Norton, AVG and McAfee overshadowed it. Windows Defender is far better in terms of capabilities than the previous version, and offers several features that makes it preferable for everyone.

Here you will find Real Time Protection, Cloud-based Protection and Sample Submission On by default. It is advisable to keep the cloud based protection of Windows Defender always on so that if it detects any latest virus, it will send information to Microsoft about it and eventually new rules for detection will be applied to all users. 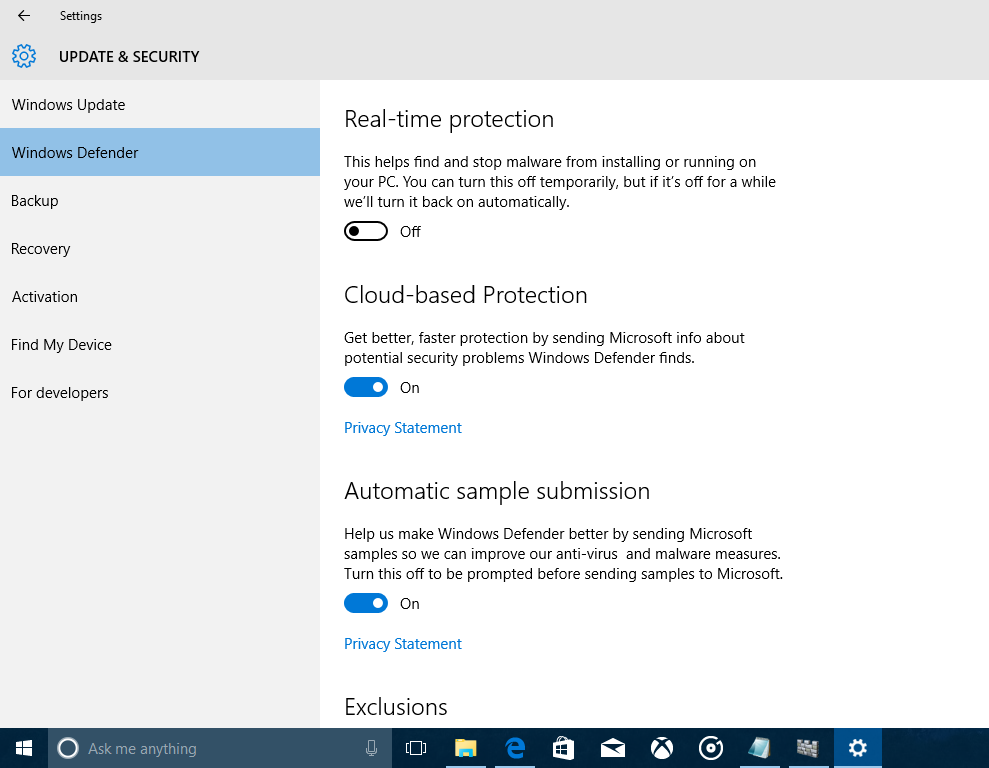 You can disable Real time Protect for some time if you are facing some performance related issues, but Windows will re-enable it later to protect the device. Windows Defender provides real time malware protection and also scans the installers and files that try to embed in the system. If you want to exclude any of them, you can. It works in the background and finds a threat, quarantines it automatically and sends you the notification as “threats detected are being cleaned”.

If you scroll down, you will find an option to add exclusions which can be used to exclude any specific file, folder or process which you know is safe and being blocked by Windows defender continuously. When you check the quarantine history and find anything that shouldn’t be there, you can unblock it and Windows Defender won’t stop that program from functioning.

It packs a powerful feature called Offline Protection found in its settings. This feature let’s Windows defender remove those annoying malware that cannot be thrown out when the operating system is running. Windows defender detects such malware and reboots the PC and cleans the files before loading the OS. This process usually takes around 15 minutes to accomplish the task and reboot the PC. 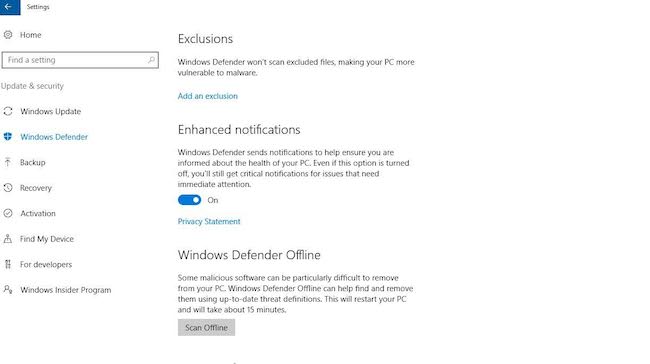 You can run a custom security scan for specific files and folders from the Desktop app Interface. Custom scans lets users manually scan network locations or external media without wasting much time.

If you already have an existing Anti-Virus which you want to use, Windows 10 allows you to run third party security software to run smoothly on the system too, without disabling the Windows Defender.

Its like a fail-safe. In case, the third party security software fails to detect any existing virus, Windows Defender will run the security scan for the limited time and find it. 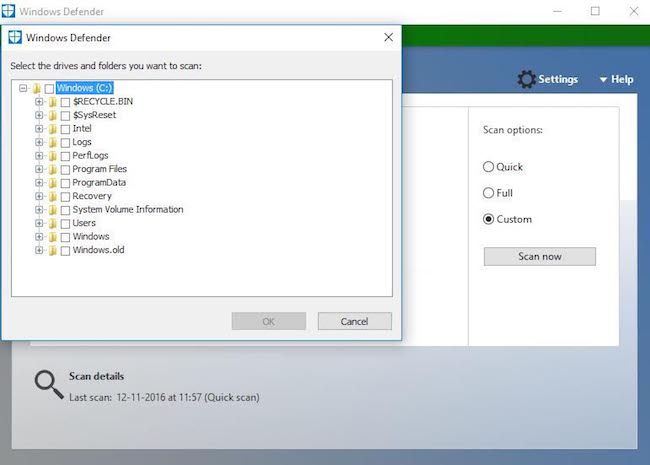 There are more ways to use Windows Defender to use effectively on the system and you can even create shortcuts to run a full scan or a quick scan with 1 or 2 clicks. You can also use the command line to detect malware in the downloads easily. We will talk about this in our next article so make sure to keep an eye on it.

When Kids get on the same PC which is used by everyone, its obvious for parents to get conscious as they have less awareness of Virus.  Thankfully, Windows 10 comes with Parental Control as a separate section which you can make use of.  Since Windows Defender works for every account, your kids will have the same security.

In order to provide limited access to your children you need to create a Child user account from Settings > Accounts > Family & other users > Add a family member then select Add a Child and put details like email ID and phone number to set up their user account. More on Parental Control here.

Microsoft has Edge as the default browser on Windows 10, and it comes with Windows Defender Integration.  Windows 10 becomes the first operating system to bring hardware-based protection along with the browser.Its called as Application Guard. This virtualization-based security technology which isolates the browser and employee activity using a hardware-based container to prevent malicious code from impacting the device and moving across the enterprise network.

Once the user exits the sessions, everything is erased. Now imagine if a malware was downloaded during the session, it is removed as well. It is a part of Windows 10 Security Stack, and will work with Edge browser for now.

We all have tons of important data on your PC with which we are not only emotionally attached, but also important for work. Viruses have evolved to an extent that they can lock down your PC, and unless you pay for it, it will stay unlocked. This is what is called as Ransomware.

Microsoft has claimed that Defender with Windows 10 Anniversary Update can protect your PC against it. Here is how:

So is Windows Defender Enough?

IMO, it is enough for most of the consumers, but we don’t rule out the need of third party antivirus solutions as well. There are possibilities where you may need for some specific need, but even if you have not installed one, you are still protected, and thats the beauty of Windows Defender.

Windows Defender is a part of your Windows 10 OS so you get it preinstalled in the system when you install the OS or buy the computer. It doesn’t occupy extra space and cannot be removed from programs and features. You have no need to update Windows Defender separately as the update comes from this via Windows updates.

In order to use the Defender you need to just turn it on and after that it will run in the background on a regular basis and protect your device. Windows Defender can identify any modification in registry data or settings and can throw out malware from the Windows recovery environment too.

Windows Defender is free to use and doesn’t have any paid version to upgrade and get all the features by paying extra money.

Let us know in the comments if you have used Windows Defender alone? Do you use it with another AntiVirus Solution? How is the overall performance ?

How to set up Dynamic Lock in Windows 10 (Bluetooth Lock)