Word on the internet is that due to cloud storage being deeply integrated into Windows Phone, storage isn’t a real matter these days. Hardware manufacturers like HTC even go so far to release devices with only 16 GB of build in storage, without any SD card slot available, even though Windows Phone 8 officially supports this now. Nokia doesn’t support SD memory either, but at least their flagship device comes with 32 GB of internal memory.

Update: Check out the Storage Shrinker App for Windows Phone. It helped us getting 5Gb free of the other storage.

Like Nirmal just recently revealed, storage is still an issue, no matter what people are trying to tell you. Well, at least if it comes to Windows Phone, that is. The fact that Windows Phone lacks a true cache management and doesn’t even clearly show what files get cached, by simply hiding the information behind a mysterious “other” inside the device’s capacity information sooner or later leads to storage issues.

One solution, a pretty dramatic one in my eyes, is a hard reset. Not only will you lose progress in all your games and even app settings, it’s very time intensive. Not to mention, that it will not protect you from suffering the same issue again after a while. Fortunately users indeed have at least a little control over the cache, which will of course not solve the issue entirely – this is up to Microsoft – but reduce the amount of wasted space.

The largest issue, which Nirmal already pointed out, is that images, which you’ve uploaded to SkyDrive, are moved to a certain folder on your device that you don’t have access to. It doesn’t even matter if you manually upload the images from within the pictures hub or use WP’s automatic upload feature. They’re transferred to that other folder either way.

I suppose these images are removed after a while, but if you’re not willing to wait for this to finally happen, you can sort of force it.

Just login to your SkyDrive by either using a browser or any dedicated app and move the uploaded files from their current folder to any other. You’ll notice, that you quickly regain the storage space previously occupied by said images.

Editors Note: It seems there WP maintains some information about every image in others. One such example is the message you add when sharing any picture on twitter or Facebook. However if the image is removed from Skydrive Upload folder, it syncs and removes that metadata from the phone also.

Before and after moving previously – automatically – uploaded images to another folder (12 MB of images). I had almost 0.02 GB (20MB Approx.) of space free after that. 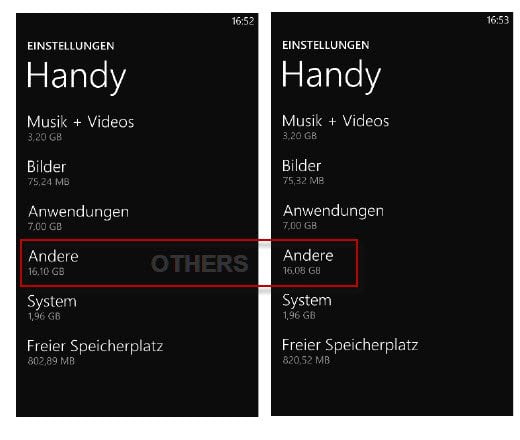 Images stored on SkyDrive are responsible for a lot of space wasted on your device. All folders you’ve declared as containing photos on SkyDrive automatically appear on your Windows Phone. This isn’t much of an issue, as long as you don’t actually open the according folders from your pictures hub.

As soon as you open these folders though, thumbnails are being downloaded and temporarily stored on your device. If you tap one of these images to see it full screen, it’s downloaded full size. The latter won’t stay long on your device. It seems to be just a matter of 1 or 2 days. Thumbnails though stay a couple more days.

There’s no way you can force to remove them from your device. But you can easily tell when this happened. As soon as the folders don’t show an image in your pictures hub anymore, you can be sure all thumbnails have been removed and the space occupied by them has been set free.

There are of course loads of other system apps that demand storage space. One that’s completely underestimated is the email application. If you have set your sync options to sync the last 30 days, or even more, and you receive/send a considerable amount of emails in that time, even these few KBs per mail can sum up to a couple of hundred megabytes. Here a couple of suggestions how to reduce the space occupied by your email communications:

If you’re an avid browser user like me, the cache files created by the Internet Explorer can quickly eat up huge amounts of your storage space. Especially if you visit graphics/images intense sites. There are two ways to clear things up, but both have their downsides.

The first thing you may want to do is to check whether you have allowed websites to store files on your device. If you did so, you can delete files which are no longer needed by going to settings -> Internet Explorer -> Advanced Settings -> manage storage and tick every checkbox of files you want to be removed.

If you don’t want to do this over and over again, just untick the checkbox “Websites are allowed to store files on my device”. You may as well open your Internet Explorer and access these settings from there. However, unchecking said setting results in slightly longer loading times for affected websites, as whatever files had previously been stored have to be downloaded again.

Next stop: browser cache. You should regularly clear your browser history, as it manages all your cached image files. You’ll be surprised by the amount of storage freed after performing that clean up. The downside is, that you will not only lose all cached images, but also stored passwords and cookies. Well, I rather enter all information again than having my IE take up heaps of my available memory.

This could as well have been filed under email, but I thought it deserved a separate mention. If you open any kind of document, be it doc, xls, pps or even pdf, from an email attachment, it is stored on your device. You would naturally look these up in the phone section of the Office Hub, but that’s not where they go. They’re – obviously – stored under email in the Office Hub. Tap and hold each document you want to remove and choose “delete from phone”.

Let’s be honest, this last step can easily be skipped, as no matter how huge your history is, it doesn’t waste much space. But if you still want to remove it, you can use WP Tools to do so. Grab it from here.

That’s pretty much all you can do. Everything else is controlled by the OS itself. Microsoft definitely needs to add options to clear the cache manually. Let us know how your experience was and if these things actually helped you in someway. We are eager to listen.

How to Remove Uninstallable Apps in Windows 10